The other day the little-ist Baker went for a walk to the park whilst I stayed home to keep an eye on the workmen who were fixing a window. It was the first time I was kinda alone in the house since she was born so I felt a little excited and decided that I was going to try and make something that I had wanted to do since I was a kid… make fudge! 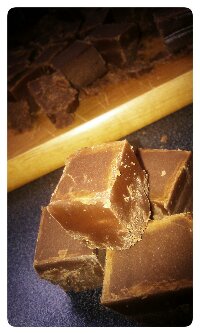 When I was about 13 years old I found a recipe to make fudge in a magazine. It looked so easy to do and I had visions of an endless supply of fudge I could make myself. Sadly, it didn’t work so all I got was a large bowl of melted, sticky sugar. I was heartbroken and until a few days ago I never tried to make it again. I knew where it had gone wrong, it was because I had no sugar thermometer to get it to the magic 114c, aka Soft Ball Stage. I tried dropping the bit into a glass of water but it wasn’t accurate enough to get it to work.

This time I was armed, sugar thermometer clipped to the side of my pan… I was ready.

And low and behold – I made chocolate fudge. Not just a little chocolate fudge, a lot of chocolate fudge. In fact, I made enough fudge for a small chocolate fudge mountain in my kitchen. If I wasn’t on a diet it would have been heaven but instead it called me to eat it knowing I had to be a little bit good that week. I decided to bag it up into little individual bags and gave it away to family.

I might have a go at doing this again at Christmas as it would make a lovely little present to give to everyone. The recipe I used was from the Home Made Sweet Shop book which I’d recommend to anyone with a love of old fashioned sweet and a burning desire to make them yourself.

Don’t forget to keep any crumbly bits that break off when cutting. I used these to put into vanilla cupcakes.

Published by Shel - Girl with the cupcake tattoo

www.happylittlebaker.com View all posts by Shel - Girl with the cupcake tattoo

What I’ve recently been blogging about